When Dr. Brian C. Hurley was five years old, his dog, Shelley, was seriously injured. They rushed her to the veterinarian, but her injuries were too extensive to save and they had to say good-bye. That was the day he decided to become a veterinarian. Dr. Hurley felt that he would do everything in his power to never let another treasured family member leave their family again.

He was born and raised in Kansas City, Missouri, but moved frequently beginning at the age of nine. He was fortunate to live in numerous states: Missouri, Alabama, Louisiana, Indiana, Florida, and Massachusetts. He is a true ‘southern boy’ at heart. Dr. Hurley did his undergraduate work at the University of Massachusetts. He graduated from the University of Florida’s School of Veterinary Medicine in 1994. GO GATORS!!! He has worked at the Gardner Animal Care Center since 1996 and became a partner in 2004. His primary interests are medicine, surgery, ophthalmology, and dentistry.

He married Dawn in 1994 and they were blessed with a daughter in 1997. Their house is protected by their chocolate lab, Rocky. He was born with a cleft palate that was repaired by Dr. Kudej at Tufts School of Veterinary Medicine. Dr. Hurley’s hobbies include reading, playing the piano, and golf. Dr. Michael McTigue is the founder and co-owner of the Gardner Animal Care Center. He enjoys meeting new pets and their families, helping them stay healthy, and aiding in their recovery. He enjoys the broad spectrum of medicine and surgery that a general practice provides. He is also very happy with the hospital which allows us to provide the best care in a pet-centered, client-friendly, and reduced stressed environment.

Originally from Rochester, NY, with an undergraduate degree from New York State College of Environmental Science and Forestry in wildlife biology, he earned his DVM degree at Cornell University. He bought the Gardner Animal Hospital practice in 1988 and has watched the steady growth since that time. He opened the Gardner Animal Care Center in June 2000.

At home, enjoys spending time with his wife, Nancy, and 4 daughters, along with two Golden Retrievers and one cat. He is an active church member involved in several ministries including biblical counseling. He has fun playing golf, skiing, fishing and other outdoor activities. 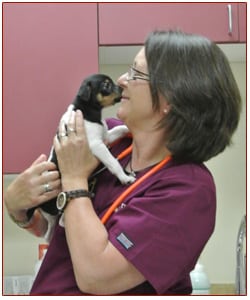 Dr. Maria Miller joined the Gardner Animal Hospital team as a part-time Veterinarian in April 2014. She earned her veterinary degree from the University of Tennessee in 1997. Since graduation, Dr. Maria has enjoyed practicing high-quality medicine in a variety of clinical settings including general practice, 24-hour emergency and shelter medicine. Dr. Maria is highly regarded for her commitment to client education; clients find her to be kind and compassionate, approachable, very knowledgeable and often quite funny! Dr. Maria enjoys working with her geriatric patients and can usually be found sitting with them on the exam room floor. Dr. Maria also earned a Bachelor of Music Education from Middle Tennessee State University and a Master of Music in Trumpet Performance from Western Kentucky University. Prior to her career in veterinary medicine, Maria worked as a high school music teacher and band director. Dr. Warner joined the Gardner Animal Hospital team as a full-time veterinarian in June 2018. Originally from Bakersfield, California, she grew up caring for a variety of animals—including horses, dogs, cats, rats, rabbits, and guinea pigs. Her love for her animals motivated her to become a veterinarian in order to help animals and the people who care about them. She graduated with a Bachelor of Science degree in Animal Science from California Polytechnic State Luis Obispo and she earned her veterinary degree from Cummings School of Veterinary Medicine at Tufts University in May 2018. Dr. Warner has served with veterinary teams in Arizona, Uganda, and India.

Dr. Warner has a cat named Mila and lives with 3 dogs (Copper, Dolly, and Sophie). She enjoys being involved with her church, dancing, hiking, and reading. Dr. Shamburger is originally from Queens, New York. She grew up caring for guinea pigs, dogs, and a cat and has always wanted to be a veterinarian, for as long as she can remember! She graduated with a Bachelor of Arts in Biology and a minor in Business from the State University of New York at Albany. She went on to earn her veterinary degree from St. George’s School of Veterinary Medicine in May 2019. Since graduating, Dr. Shamburger has completed a rotating internship in small animal medicine and surgery at BluePearl Veterinary Partners in NYC.

She has a geriatric kitty named Luna and in her free time, she enjoys snowboarding, traveling, and trying new food. Dr. Christy Cox is originally from CT and is thrilled to be joining Gardner Animal Care Center and expanding into exotics! She received her undergraduate degree from Boston University and her Doctor of Veterinary Medicine from North Carolina State University. After graduation, she moved back up north to be closer to family, where she has spent the past four years working with both cats and dogs as well as a variety of exotic species, including reptiles, birds, and small mammals. She is experienced in husbandry, handling, medicine, and surgery of all exotic species and is excited to bring these skills to the area. Dr. Cox shares her home with her husband and their “Island of Misfit Toys,” which includes two dogs, a one-eyed cat, a guinea pig, and three pet store reject Budgies. Her special interests include backyard poultry, surgery, and wildlife medicine. Outside of veterinary medicine, she enjoys playing pool as well as hiking and kayaking.

Have questions? We're here to help!

Complete the form below and a member of our team will get back to you as quickly as possible.

Ready to make an appointment?

Click the button below to get started! Request an appointment in minutes online.