A special bond between a Woburn, Massachusetts girl and her 131-pound Great Dane is making national news. Bella Burton, an energetic and talkative 10-year-old, suffers from Morquio Syndrome and up until recently relied on a variety of crutches, walkers, and wheelchairs for mobility. Now, she simply leans on her dog George.

Bella’s rare inherited birth defect occurs in only one of every 200,000 births. The progressive disease is caused by the body’s inability to break down sugar chains, known as glycosaminoglycans, into more basic molecules. The condition affects a child’s appearance, organ function and physical abilities.

“It attacks her healthy bone growth,” her mother Rachel said in a WCVB-TV interview. “So that’s why she’s short-statured.”

Bella has been fighting against Morquio Syndrome since she was two. She has had nine major surgeries on her hips, knees, and feet, and began showing major improvements after receiving enzyme transfusions last June. She has shown even more progress since she met George.

“I had wheelchairs, walkers, Canadian crutches, regular crutches, and then we got George and I dropped my crutches and started to use him,” Bella said. 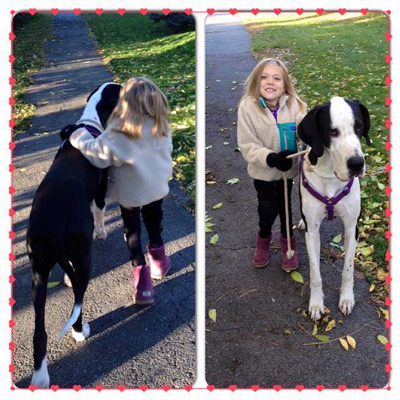 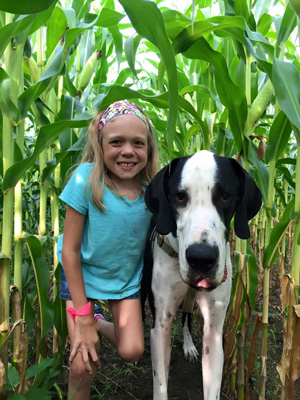 George was trained as a service dog at Service Dog Project, Inc. in Ipswich, MA and moved in with Bella and her family in January. Now, he goes with her everywhere – even to school. Bella now walks to school on her own (with George) and can play outside and at the gym without the use of crutches. Bella leans on George to navigate her school’s hallways and make trips to the bathroom. While she’s learning, he rests patiently.

“He knows what to do,” Bella said. “He knows where all my classes are.”

Service Dog Project has donated more than 100 Great Danes to individuals with severe balance and mobility limitations. Once paired, the dogs learn the unique needs of their new handlers and are trained to meet those needs.

“Bella’s walking gait and stamina have improved as a result, and she is greatly enjoying her independence,” the project states on their website.

George has been chosen as the top service dog in the country for 2015 by the American Kennel Club’s Humane Fund Awards for Canine Excellence (ACE). In addition to their television appearances, “Bella and George” can be found on Facebook. The page showcases pictures of their adventures together and provides updates on the young girl’s progress.