Golden Retrievers have long been the poster breed for family pets. Friendly, obedient, and intelligent, Goldens are ranked as the third most popular dog breed by the American Kennel Club. Although you wouldn’t suspect it from their care-free demeanor and smiling faces, the breed is plagued by a devastating predisposition to cancer. Approximately 60% of Golden Retrievers will develop cancer, a number more than double the average of all other breeds.

While Goldens in the United States are most likely to develop hemangiosarcoma, those from the United Kingdom are more prone to lymphoma. The cause is both genetic and environmental, but researchers are still unsure exactly which genes are involved. Cancer is the leading cause of death in all but 11 purebred dog breeds. 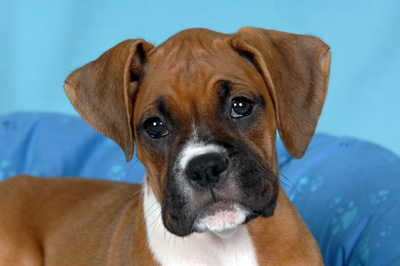 The Boxer is highly prone to Mast Cell Tumors.

Regularly checking your beloved companion for new or unusual lumps or bumps is the most proactive step you can take toward catching skin cancer as early as possible. Since early removal of a tumor is the best course of action, a doctor at Gardner Animal Care Center may recommend removing this mass or growth from your pet’s skin.

If you notice a major change in your pet’s health, eating habits or lifestyle, call Gardner Animal Care Center immediately to make an appointment. Cancer treatment is becoming more available for dogs due to advances in technology.

Other general symptoms of cancer include skin wounds that will not heal, weight loss and loss of appetite, difficulty swallowing, any bleeding or discharge from any orifice, loss of energy, persistent lameness or stiffness, and difficulty breathing or going to the bathroom.